Ken Daneyko goes over the action from the first round in this special playoff edition of Dano on the Devils.

MSGNetworks.com: We know that the Devils didn’t reach the postseason, but there are Devils connections all over these playoffs, including Martin Brodeur being the goalie coach for the Blues. How has he helped Jake Allen during this terrific run?

Ken Daneyko: Well, there’s no doubt that Marty had some influence on Jake Allen. [He] went through a tough time in the middle of the year and actually didn’t make a road trip because the Blues wanted him to regroup mentally. It’s great to see athletes go through a rough time and battle through it. You have to give credit to Marty for changing his mindset. Marty knows how to deal with Jake Allen and knows how to take some of the pressure off of him. He’s making Allen understand what it takes to be a consistent goaltender on a nightly basis.

But this Blues-Wild series isn’t over. It’s tough to overcome a 3-0 deficit, but Minnesota has played decently well in this series and if it wasn’t for Jake Allen, it’d be a different story.

MSGNetworks.com: Continuing with the Devils connections, we have the Maple Leafs and your former general manager Lou Lamoriello. They’re giving the Capitals all they can handle. Are you surprised how well they’ve played against Washington?

Ken Daneyko: You have to be a little surprised with the way the series has turned out. These young Leafs have been able to attack Washington with their speed and skill. Toronto’s defense, which some people thought was going to be a weakness, has done a really good job getting the pucks to the forwards. Jake Gardiner and Morgan Rielly have been terrific for them. 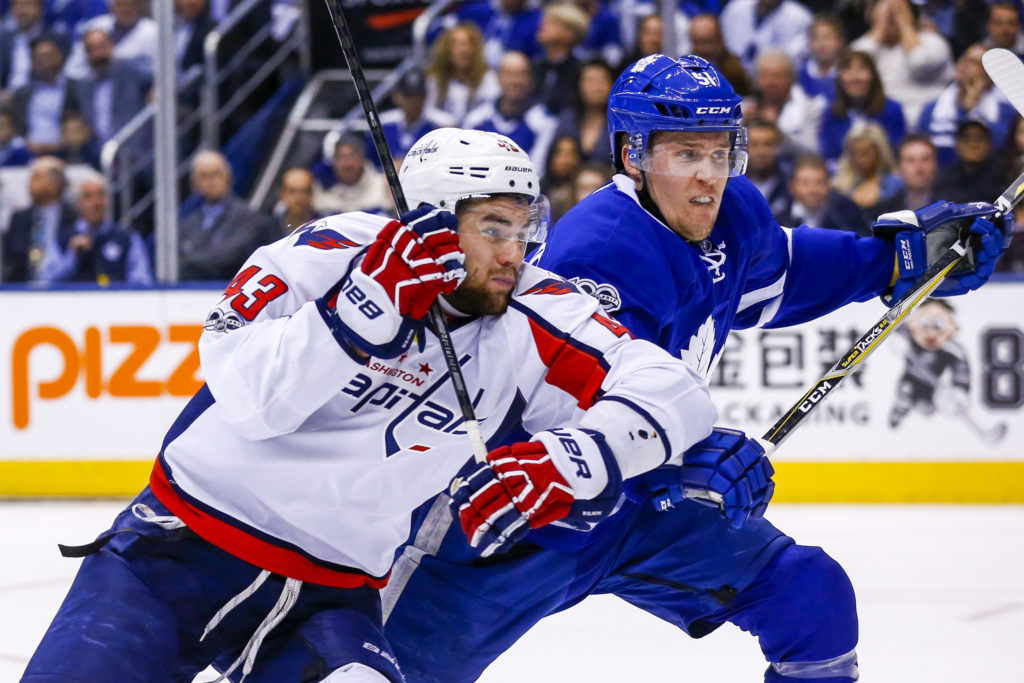 When you have Mike Babcock, Lou Lamoriello and Brendan Shanahan, guys that have won Stanley Cups, that knowledge they have can be dispersed to these young guys. It can relieve some of that pressure and those kids are having a blast out there. I’m been on teams like this. For example, in ’88, we made the playoffs the last day of the season and we upset the Islanders who were the No. 1 seed that season. The Leafs have really embraced [the pressure] and it’s been a fun series.

MSGNetworks.com: Moving on to the other No. 1 vs. No. 8 matchup, we have to give you tons of credit, you picked the Predators as your dark horse in the postseason. What did you think of their sweep against Chicago?

Ken Daneyko: As they say, a blind squirrel finds a nut every once in awhile! I didn’t expect a sweep, but I really believed in the Predators. It was a combination of things – last year, they came close before losing to the Sharks and they’ve built off of that. They’re a better team this year and they’ve added a little more offense. Guys have really stepped up and that defense is formidable. They’re one of the best in the league in getting the puck up the ice.

Forwards, like Viktor Arvidsson and Ryan Johansen, are finally playing to a level they’re capable of. They have a lot of talent, but you can’t win unless your goaltender plays extremely well and who’s been better than Pekka Rinne in these playoffs? They’re playing a relentless style and this team is going to be dangerous. MSGNetworks.com: A favorite that did take care of business in the first round was the Penguins, who dispatched the Blue Jackets in five games despite being beset with a ton of injuries. What impressed you about their series win?

Ken Daneyko: Pittsburgh is the defending Stanley Cup champion for a reason. I always say your top players have to be your top players and look at the likes of Evgeni Malkin, Sidney Crosby, and Phil Kessel all leading the playoffs in scoring. Then you have the supporting cast of Jake Guentzel and Conor Sheary. But the best thing about the series was Marc-Andre Fleury. He was thrust into action 20 minutes before Game 1 because of an injury to Matt Murray. That’s a lot of pressure there, but he’s been through this before and won a Cup. He stepped up and did what he had to do. He faced a lot of rubber against Columbus. Columbus played hard and gave Pittsburgh all they could handle. But at the end of the day, it was too much Malkin, Crosby, Kessel, and the rest of the Penguins who know how to get it done in the playoffs.

MSGNetworks.com: Staying in the East, the Rangers-Canadiens series has been one filled with close games and physicality. What are your thoughts on it?

Ken Daneyko: This series features two of the most evenly matched teams you’re going to see. This series has probably been the best of the bunch in the first round. It’s been fantastic. I didn’t expect the physicality from Montreal or the Rangers. You don’t really look at those teams as being built in that way.

Both teams have played with a whole other level of intensity, desperation, passion, and it’s a series that features two terrific goaltenders. It’s been a heck of a series and we’ll see what happens in Game 6, but this one has been entertaining. It’s tough, old-time playoff hockey and I love it. I’m a little old school and love that kind of rivalry and dislike for each other. I know that there aren’t a lot of goals and some people look down on that, saying that it’s not as fun. I beg to differ. This has been as a good of a series as I’ve seen.

MSGNetworks.com: We go to another series that featured an overtime game-winner last night. The Oilers are up 3-2 after Game 5. How much do you admire their moxie against a veteran team like the Sharks?

Ken Daneyko: [Game 5] was a tough loss for San Jose and they’re going to have to regroup for Game 6 at home. I think they probably will. But you come off a 7-0 whitewash in Game 4 and you have a 3-1 lead in Game 5. We’ve seen throughout these playoffs, that no lead is safe. It’s harder to defend two or even three-goal leads nowadays. This has been another fun series. The Oilers are kind of like the Leafs – they’re young, exciting and they have star power. They showed they could bounce back after getting shellacked in Game 4. When you’re playing in the playoffs, you have to find a way to stay emotionally balanced and keep a level head. [Oilers coach] Todd McLellan made sure they weren’t too demoralized after Game 4. Edmonton has shown some intestinal fortitude to come back. I have a feeling this one is going seven, though!

MSGNetworks.com: Moving on, the Ottawa-Boston series has been marred by some controversy because of the officiating. Obviously, you’ve experienced countless playoff games, so in your opinion, does the officiating change in the playoffs?

Ken Daneyko: The officiating was a lot different in my era because the refs didn’t want to be the difference in the hockey game. There was a lot more let go, even in the regular season. Sometimes you’ll see one team in a series feel officiating hasn’t been as good as they would have liked, while another team might think they’ve deserved the benefit of calls.

Having said that, you have to be able to overcome it. The game hasn’t changed that much in 100 years – sometimes the officiating is good, bad or indifferent. No matter what, you have to battle through it and you have to stay disciplined. That’s the key in the playoffs, being able to keep your composure even if you feel like you were taken advantage of. The refs are going to miss stuff, it’s a fast game and it happens.

That’s happened a few times to Boston, but take nothing away from the Senators. Their gameplan has been unbelievable and coach [Guy] Boucher has done an unbelievable job. They’re playing tight defensively and getting good goaltending. They also have a ton of talent up front, a lot more than people anticipated. Bobby Ryan has contributed and Erik Karlsson might be the best player on the ice in this series. Derick Brassard had a tough year after coming over from the Rangers, but has been big so far in the playoffs.

MSGNetworks.com: Finally, the Ducks finished off a sweep of the Flames earlier this week. Is the bracket open for them in the West?

Ken Daneyko: Well, they’re probably happy that the Blackhawks are out! They’ve had a tough time against Chicago. But that Ducks series wasn’t your typical four-game sweep. Calgary could have won two of those games.

Anaheim is a team loaded with grizzled veterans like Corey Perry and Ryan Getzlaf. They found a way to win and the Flames found a way to lose. We use those cliches all the time, but that was the type of series it was. Calgary is a team that’s learning and they learned some hard lessons. You can’t make a timely mistake or a take costly penalty at the wrong time. Your goaltender has to play well and Brian Elliot, who carried them down the stretch, really struggled in the playoffs. You’re not going to beat the Ducks when your goaltender can’t make the big saves. The Ducks are formidable. They’re a team that will be tough to beat and they’re as deep as any team in the playoffs.